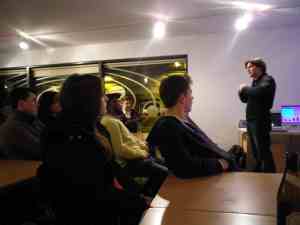 For our January meeting, David Robert Grimes gave us a comprehensive and entertaining talk on the misuse of statistics in the media. Starting with an explanation about how statistics can easily be distorted in the wrong hands (the maths bit), David talked about the reality behind cancer statistics and how testing for breast cancer at too early an age might actually be counter-productive. David also discussed problems with comparing relative statistics and misrepresenting small absolute changes in data as huge problems. He then considered the incursion of PR releases into journalism (“churnalism”) and false balance – the creation of artificial debates in an effort to create controversy where no scientific controversy exists. Examples of these are creationism vs evolution and climate change. David also hits on anti-vaccination and HIV denial. David finishes by suggesting what people can do to counter bias and error. It was a terrific talk, full of stories and examples.

David has a PhD in Medical Physics and is an accomplished actor and musician. His blog is Three Men Make a Tiger and he can be found on Twitter at @drg1985.