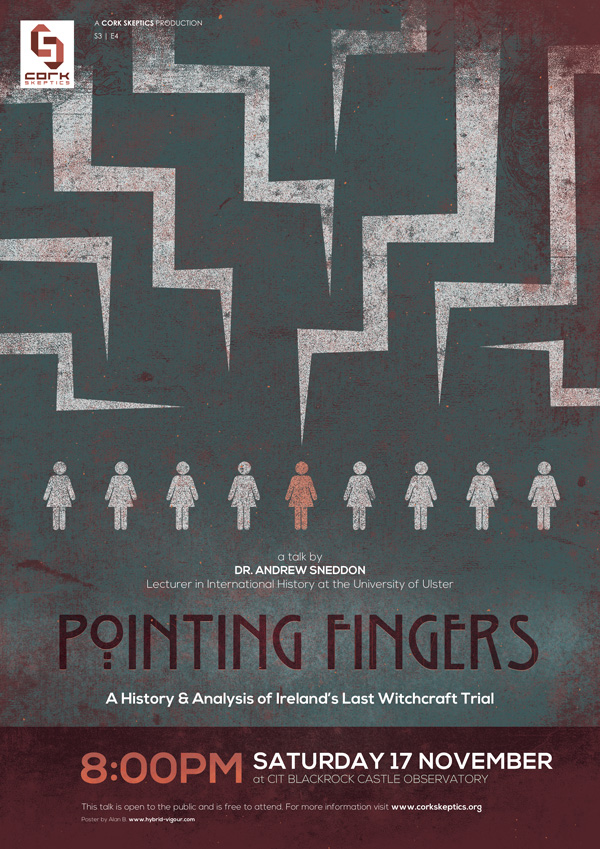 Our next meeting will take place on Saturday 17th November at Blackrock Castle Observatory, starting at 8.00pm. The talk is by Dr. Andrew Sneddon, lecturer in International History at the University of Ulster.

This talk will re-examine Ireland’s last prosecution for witchcraft at Carrickfergus Assize Court in Co. Antrim in March 1711. It will explore the reasons why eight women found themselves in the dock accused of causing the possession, by means of witchcraft, of a young woman, Mary Dunbar. It will also explore why, in a period of increasing scepticism towards ‘proving’ the crime of witchcraft all over Europe, the women were found guilty under the sixteenth-century, Irish Witchcraft Act. This will all be placed in its theological, intellectual and legal context by exploring the European ‘witch-craze’ of the early modern period.

About the speaker: Dr Andrew Sneddon is lecturer in history at the University of Ulster, specialising in social and intellectual history, exploring through this the religious, legal, medical, and ‘supernatural’ histories of Britain, Ireland and, to a lesser extent, Europe. He has published widely in these fields and in 2008 published a biography of the sceptical witchcraft theorist and bishop of Down and Connor, Francis Hutchinson (1660-1739). He is currently writing an account of the Islandmagee trial, to be published in early 2013 and entitled, Possessed by the Devil, as well as a tome that will explore witchcraft and magic in Ireland, 1586-1949, which is due to be published by Palgrave Macmillan in 2014.

At our last meeting of Skeptics in the Castle, we turned our attention to how people can be fooled by scams and frauds. Ralph Riegel, Southern Correspondent of the Irish Independent, talked about the many ways in which people can be persuaded to part with their earnings. The list scams was long: many of them affecting people locally.

Ralph talked about how credit card fraud is one of the most widespread scams, with a 12% increase in fraud in Ireland alone in 2010.  He reported how people, purporting to be from large companies and banks will ring people to ascertain their credit card details and bank details over the phone. He also had a word of caution: if you suspect you have been defrauded, you need to call your bank immediately. Failure to act on a suspected fraud can leave you with the costs.

Ralph talked about how groups of specialist scammers, known as tiger gangs, can arrive into a city with equipment to create hundreds of forged credit cards and ATM cards. By acting quickly – purchasing easily resellable items and withdrawing sums of cash from the banks – the scammers can make large amounts of money and be long gone before the authorities catch up with them. In 2006, a gang were jailed for 5 years in Cork following a large-scale forging operation in Wilton.

One of the most well-known internet scams are the Nigerian “419” emails, where an unsolicited email arrives in your inbox telling you that you can gain access to a large sum of money if you give them a “small” amount of cash to first deal with some up-front bureaucracy. Despite the see-through nature of these emails (atrocious spelling, generic email accounts and the fact that the emails are far too good to be true), at least 14 people a year in Ireland lose money from the scam. The amounts involved can be quite considerable. 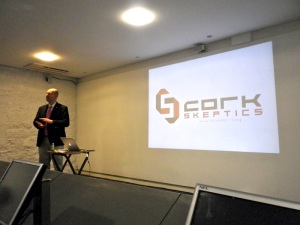 Pyramid schemes were also discussed. In 2005, at the height of the boom, a “gifting” scheme began in West Cork, taking advantage of a legal loophole. People would invest 20,000 euros with friends and neighbours in the expectation that they would soon get back four times that amount. When the scheme crashed in 2006, the consequences were dire for the local community with a number of serious assaults and at least one case of false imprisonment reported.

In his wide ranging discussion, Ralph also spoke about false charities, identify theft and counterfeiting. Following this there was an active discussion on all manner of different criminal schemes.

We would like to thank Ralph for his fascinating talk and we wish him the very best with “Shattered“: his recently published book on victims of crime in Ireland.